The Uncanny X-Men are back in the spotlight with a pair of coinciding series that bring with them a new revitalization of a franchise that was once the pearl of Marvel Comics! Setting the Blue and Gold standard!

Once upon a time there were these misfits teenagers brought together under the sage guidance of a headmaster of a “school for the gifted”, but just how gifted these unlucky teens were wasn’t entirely clear even for their creator. After a string of successes that included the Fantastic Four, Spider-Man, the Avengers and even the Hulk, Marvel Comics the House of Ideas wanted more from Stan Lee and demanded another hit from the man!

Stan had already given the world the mightiest, the most amazing, and the fantastic — the only thing left to do was go astonishing and uncanny! The answer came in the form of The Uncanny X-Men. Published in 1963 the group would be a very close reflection and raise social commentary on the social upheavals being experienced in American culture. The X-Men were “mutants” — humans born with the genetic propensity to super powers!

Where most of Stan’s creation had derived their abilities from unfortunate accidents, given to supernatural or super scientific circumstance, mutants were born with their gifts, and ultimately became the focus of fears and prejudice by a “normal” society that felt threatened by mutants evolutionary advantage, or in some cases their ascent to superiority. It led to some of the series most outstanding storylines.

The obscure popularity of the X-Men especially in those early adventures certainly solidified an audience for the group of teenagers who took it upon themselves to travel the world in defense of those feared and disenfranchised who couldn’t help themselves, but suddenly the title’s demand starting to wain. In 1969 the original stories ended with the release of Issue #66 and the series continued with reprints into it’s Issue #93.

In 1975 the “All-New, All-Different” line-up was introduced by Len Wein and Dave Cockrum and with Giant-Size X-Men #1 a new era was born. The team was a mix of diversity featuring characters from all corners of the globe. At first the new members had a difficult challenge of proving themselves, especially to one another, but soon they would develop into a family. These X-Men would be properly introduced with Issue #94 of The Uncanny X-Men written by Chris Claremont.

Claremont would begin an unprecedented 16-year run on the title that would propel The Uncanny X-Men to the top at Marvel Comics marking the mighty mutants (alongside Spider-Man) the lead sellers for the publishing giant. The X-Men’s message of inclusivity among diversity resonated with readers from all walks of life, and secured their transition into mainstream with a blockbuster film franchise, Saturday morning cartoons and several action figure toy lines.

In recent times, the mutants have taken a backseat to the other members of the Marvel pantheon including The Mighty Avengers who have themselves overtaken the cinematic spectrum of the Marvel Films universe and become bigger stars on the big screen then they might have ever been in the publishing mecca. Over the course of the characters’ rise among theater audiences, the Avengers became the center narrative of the publishing arm of Marvel as well.

This didn’t leave much room for the X-Men who never fell out of favor with their fandom, but were relegated to the side as a clear uniformity was built to strategically align with the cinematic world, to which the X-Men were not (at least at the moment) subscribed to. While many of the publishing events centered on the Avengers, the X-Men were often written into B-stories, or segregated into inclusion with representation coming only from the bigger stars in the line like Wolverine or Storm.

It has also quickly become evident that the Marvel Cinematic Universe has also substituted the mutants within its narrative with the Inhumans — a nearly godlike off-shoot of the human race that has lived in seclusion and often in hiding from the rest of mankind, but who have been taking their place at the table in contemporary plot lines. The Inhumans became centrifugal in two recent publishing events, and took over an arc on television’s Agents of SHIELD.

The Inhumans will also headline their own primetime series this fall on ABC. 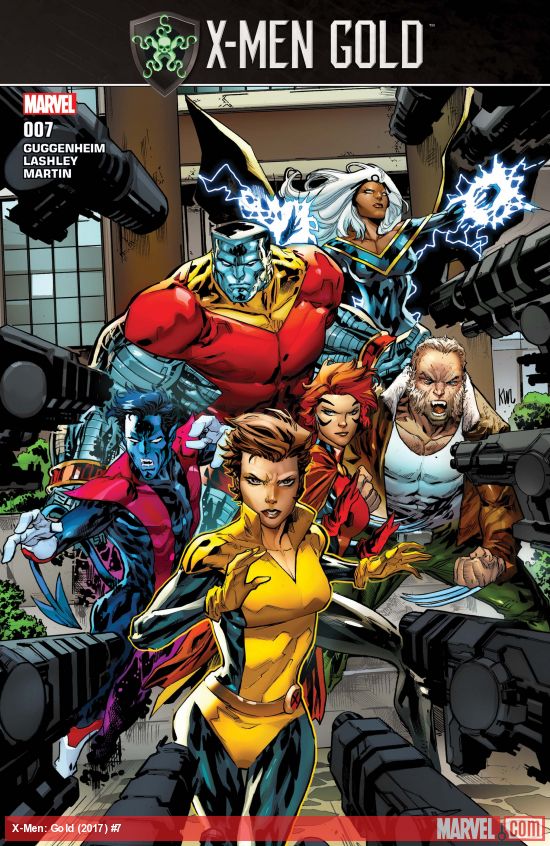 Astonishing in Blue and Gold

One would assess that with the continuing profitability of the X-Men movie franchises still drawing audiences nearly two decades later, especially after a recent cinematic reboot, the mutants had a fanbase that would not be ignored. It appeared that the time to reinvest in the X-Men had arrived. Springing out of the recent Inhumans vs. X-Men limited series which pit the two enigmatic forces against one another, Marvel retconned the X-Men titles with a series of brand new #1s.

Reintroduced in the one-shot X-Men Prime #1 the future of the X-Men is precarious at best, so looking to the future Storm insists that Kitty Pryde return to the fold and assume a role she has been groomed for her entire career. Ororo wants Kitty to lead the X-Men and serve as a role-model, as headmistress to the next generation of young mutants. In order to achieve that goal, Kitty demands that the X-Men must give up their exile and rejoin the rest of planet.

At the conclusion of the aforementioned Inhumans vs. X-Men limited series, the X-Men moved their base of operations to Limbo in order to escape the effect of the Inhuman’s Terrigen mist; released into the Earth’s atmosphere and proven dangerous to mutants. With little other choice left to them, the X-Man Magik moves their headquarters to her demonic Limbo. Not exactly an ideal location by which to thrive and or raise a family. Kitty demands that the group return to Earth.

Using her skills of teleportation Magik lands the X-Men and their mansion into the heart of New York City, literally placing the home in Central Park. Kitty is able to keep most of the team together, but does not convince the “original” five X-Men including Jean Grey, Cyclops, Angel, Beast and Iceman to stay with the group. The time-displaced teenagers decide that the future they’ve inherited is not all that it’s cracked up to be and carve out their own path.

X-Men: Gold is written by Marc Guggenheim and follows the more traditional course of action as Kitty attempts to secure her X-Men’s place in the world. Fighting on her side are classic X-Men including Storm, who has given up the reigns of leadership to Kitty, Colossus, Nightcrawler, Prestige (Rachel Grey) and Old Man Logan. Their mission statement remains the same, and already they’ve come face-to-face with a new Brotherhood of Evil Mutants and Sentinels.

The title in the line X-Men: Blue is written by Cullen Bunn who is propelling the younger “originals” led by Jean Grey on a completely different tangent. This group has decided on Jean’s insistence to ally themselves with the X-Men’s greatest foe Magneto and it’s evident that the Master of Magnetism has his own agenda in the works. If some of these larger, over-reaching arcs sound familiar, you’re not alone. You’ve been reading X-Men comics for more than three decades.

No one may want to admit that what the X-Men require is a significant reboot that simplifies the mythology. It had gotten particularly out of hand in the late 90s into the start of the new millennium, and has just not been able to get back to the richer, humanistic story arcs that Claremont infused into the title. The writer even attempted to return to the comic for a short period of time, and it appeared that the magic truly had gone off into limbo.

X-Men: Gold and X-Men: Blue are on sale now and are published by Marvel Comics.

iEditorial | Does STAR WARS The Rise of Skywalker Matter?