The Flash star has been across all parts of the multiverse and back, most recently in the “Elseworlds” crossover! Hitting the convention circuit in 2019, the actor is open to all new adventures! For John Wesley Shipp the idea of stepping back into the suit that immortalized his place in genre-fandom may have been the most surreal moment of his 40 years in entertainment. Nonetheless as Kate Main and the rest of the expert costuming team responsible for suiting up the most popu
11 views0 comments

The superstar producer of hit series The Flash, Arrow, Blindspot and surrounded by his closest colleagues and cast members of his shows receives one of the Television Academies highest honors at a gala event in New York City. Super-producer Greg Berlanti has become synonymous with the televised DC universe. Since launching the hit Arrow based on the Green Arrow comic book hero, seven seasons ago on The CW, Berlanti and his production team have created a multiverse in primetim
5 views0 comments

The roster of guest stars appearing in this year’s “Elseworlds” crossover event expands and includes a Flash from the past — 1990 to be precise! It was the sonic boom heard round the world this week! As fans hungry for more information on the upcoming #DCTV crossover event that will once again bring together the casts of The CW hit series The Flash, Arrow and Supergirl over 3-nights beginning December 9 got more revealing pics from the set. This year’s theme is “Elseworlds” a
5 views0 comments

Mattel toys realizes fan’s dreams and delivers on one of the most sought after collectibles just released…THE FLASH action figure based on the 1990 Television Series! It could be considered the Holy Grail of all collectibles! In 1990 CBS premiered The Flash in primetime based on the DC Comics superhero and starring John Wesley Shipp. The one-hour action adventure series was propelled by the theatrical success of Tim Burton’s Batman which is largely responsible for igniting th
56 views0 comments

The tweet heard round the world has fans wondering if The CW series is preparing to introduce some more changes, and more heroes, this season that might lead to a spin-off! Though it’s only just entered into its Third Season DC’s Legend of Tomorrow which premiered four weeks ago on The CW, is apparently already going through some changes — and some may have a significant affect on the series’ cast as the adventure progresses. Accused of having “broken” the timeline, the Lege
3 views0 comments

iReview :: THE FLASH - “The Flash Reborn”

Season 4 of The CW series The Flash returns and with it a new set of problems for Team Flash as they try to carry on without the Scarlet Speedster…but wait! The Flash is back — literally! After stepping into the speed force at the calamitous climax of Season 3 and preventing his own future-self from carrying out a mad plan to steal time right from under him, our hero Barry Allen (Grant Gustin) returns to fight another day! By the end of the Season 4 opener entitled “The Flash
2 views0 comments

Here I am...The Flashpoint was only the beginning of Barry Allen’s problems! After fixing the timeline, effectively returning the Reverse-Flash to the night of Nora Allen’s murder, this time not interfering, but allowing the psychopath to carry out his mission, it would appear that The Flash had solved all his problems. Or did he? It would seem that the consequences from “Flashpoint” carried over into the second episode of The Flash Season 3 in “Paradox”. Barry Allen (Grant G
0 views0 comments

Careful what you wish for. Clearly it's never a good idea to travel back in time and trifle with your own history. At the conclusion of last season on The Flash, Barry Allen (Grant Gustin) had just had enough! In a final confrontation with his sworn enemy ZOOM, before The Flash was ultimately able to stop the madman from destroying his world and saved the multiverse in effect! The villain, although, struck our hero with a terrible blow -- murdering Barry's father, Henry Allen
1 view0 comments 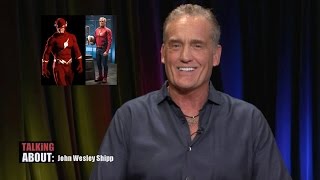 Emmy Award Winner John Wesley Shipp returns for another season of The CW hit action series The Flash next month, but in the meantime he takes on a particularly relevant challenge, returning to the stage and appearing in a very important production of Reginald Rose's classic play "12 Angry Men". He sits down to discuss the project and share some secrets from the upcoming new season! #TheFlash #JohnWesleyShipp #TheCW
1 view0 comments

Comic-Con season is in full effect and although San Diego Comic-Con has heralded the start of it unleashing upon its fans very high expectations for the upcoming fall television season, the east coast is getting in on the action as well. Returning to the Mohegan Sun Casino and Resort Terrificon, Connecticut's Terrific Comic-Con kicked off the weekend of August 19 and running through 21, featured many of fandom's most popular celebrities including "The Flash" John Wesley Shipp
0 views0 comments

John Wesley Shipp...Back In The Suit

Summer may be signaling the last of its record breaking heat across the country (we hope), but for fans of the hit CW show The Flash fall couldn't come soon enough. For actor John Wesley Shipp Season 2 couldn't have been more remarkable, with the most unpredictable whiplash of a twist that threw him back headlong into the midst of the Speed Force. John has a unique connection to The Flash franchise having originated the role of CSI investigator Barry Allen in the 1990 prime t
3 views0 comments