The latest DC primetime live-action adventure is coming soon! DC’s STARGIRL will be hitting airwaves this May and will be tapping into the Golden Age of Heroes to introduce the next generation of young justice! Stargirl “Pilot” Pictured: Brec Bassinger as Courtney/Stargirl — Photo: The CW — © 2020 The CW Network, LLC. All Rights Reserved. The heavens up above are shining bright! With the news that DC’s Stargirl will be launching in May, introducing (or perhaps re-introducing)
0 views0 comments

iFeature | CW’s THE FLASH Gets a New Showrunner

Changes are in full-speed as The Flash welcomes Eric Wallace as the series new showrunner in Season 6, and Todd Helbing moves out of the multiverse he’s navigated for the last two years! Amidst the recent announcement that Arrow will be culminating its series run with a 10-episode Eighth Season next fall, an all-new showrunner has moved into the reigns of another Arrowverse hit! It appears that next season The Flash starring Grant Gustin in the title role of Central City’s Sc
7 views0 comments

iFeature | ARROW Season 8 Will Be Its Last

After 8 Seasons of urban warfare in the streets of Star City, it looks like the Emerald Archer is hanging up his bow and arrow as The CW prepares to retire the premiere series that launched a multiverse. It was the shot heard round the Arrowverse! Stephen Amell the lead actor of The CW’s hit Arrow announced on Wednesday that the series will be coming to an end after delivering 10 episodes in its Season 8 this fall. The show which has become the anchor of the primetime DC Comi
3 views0 comments

The streets of Gotham City are about to shudder as the Batwoman starring Ruby Rose gets picked up for a pilot with very high probability that a full-series order is not far away! With a more than smashing introduction onto the primetime spectrum on this season’s Arrowverse crossover event, The CW is preparing to spin-off its latest hero as Batwoman gets green lit and prepped for production. The series would star Ruby Rose in the title role of Kate Kane, a reluctant hero desti
11 views0 comments

On the latest image released from The CW’s upcoming “Elseworlds” crossover event, the prime time Trinity are front and center...with a little help from a friend. With only weeks until the highly anticipated “Elseworlds” crossover takes over The CW’s primetime landscape, the folks behind the DC series have shared another image, this one putting the network’s “trinity” of leads front and center and joined by one of the surprise guest stars that have been announced will be part
3 views0 comments

A dastardly weird DC Comics villain is on a crime spree in Central City as Barry and Iris team-up to bring down the macabre menace of the Rag Doll! Episode 5 of The Flash introduces and reimagines the classic Golden Age villain Rag Doll (embodied by Guest Star Troy James) who often proved a formidable adversary of Jay Garrick, and challenged the Crimson Comet as a lead member of the Secret Society of Super Villains. The eerie and creepy character has been made terrifyingly co
6 views0 comments

The roster of guest stars appearing in this year’s “Elseworlds” crossover event expands and includes a Flash from the past — 1990 to be precise! It was the sonic boom heard round the world this week! As fans hungry for more information on the upcoming #DCTV crossover event that will once again bring together the casts of The CW hit series The Flash, Arrow and Supergirl over 3-nights beginning December 9 got more revealing pics from the set. This year’s theme is “Elseworlds” a
5 views0 comments

The CW Crossover Event is bound for ELSEWORLDS

Expect the unexpected this season when The CW DC TV crossover event takes its heroes to the edges of uncharted new frontiers when the limitless ELSEWORLDS of possibilities opens the flood gates to an all-new adventure. The final frontier of superhero storytelling has just been breached! Cisco Ramon may be able to navigate the multiverse, but even he isn’t prepared to surf the wave of what’s about to hit! This season when the epic 3-night crossover event plays out on The CW it
1 view0 comments

The Flash Family welcomes a new speedster, but exactly what does it mean for Team Flash and especially Barry and Iris when the arrival of their “future daughter” opens up a whole new box of crazy in Season 5 of The Flash! Congratulations! It’s a girl! Leave it to superheroes, not withstanding all the labor pains and all, the cliffhanger of Season 4’s The Flash revealed that newlyweds Barry (Grant Gustin) and Iris (Candice Patton) had been stalked all year by a “mystery girl”
3 views0 comments

Guaranteeing a high-powered evening of crime fighting, The CW’s Tuesday night is raising the wattage on action and adventure when BLACK LIGHTNING returns for Season 2! Though the mild-mannered alter-ego of high school principal Jefferson Pierce may have enjoyed some anonymity in the past, given the superhero’s popularity and longevity Black Lightning has proven a formidable ratings success in The CW’s primetime line-up. Starring Cress Williams in the title role, the one-time
3 views0 comments

The CW is promising to raise the capes promoting its 3-Night DCTV crossover event bringing together the most iconic characters! Just follow the signal! The Arrowverse is about to get much bigger this season! When our DCTV heroes return from their summer hiatus to reclaim The CW primetime, they’re going to be bustling with all kinds of new adversaries and challenges to face! On The Flash after facing off against The Thinker, Barry and Iris (Grant Gustin and Candice Patton) wil
3 views0 comments 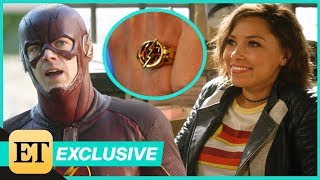 Daddy’s Mystery Girl has been revealed but with the emergence of their future-daughter in the midst comes an entirely new wave of problems including a “big bag” that may be looking to carve the heart out of Team Flash in the trailer for the upcoming new season! Among the most anticipated moments at this year’s San Diego Comic-Con was the appearance of the now more robust cast of The Flash which has expanded to include new series regulars Hartley Sawyer who plays Ralph Dibny /
4 views0 comments

At this year’s San Diego Comic-Con fans will have an opportunity to ask the cast of The CW’s THE FLASH questions about the upcoming new season which will expand upon the Flash Family legacy. in just a week, thousands of fans will descend upon San Diego for the biggest fan convention in the world! San Diego Comic-Con has evolved into the most coveted event of the season, a celebration of all-things in “Geek-dom” that have inspired the popular rise of the comic book, science-fi
7 views0 comments

This Week | THE FLASH Runs Full-Speed into a Season Finale!

THINK FAST! The Flash is going to have to if he plans to finally defeat an enemy that has proven ten steps ahead of the Fastest Man Alive! It’s been an extraordinary season for all the DC inspired television series! Defying expectations show-runners dug deeper into their main characters backgrounds and brought out adversaries that were far more inclined to push the boundaries of the directions that long-running series had established! On FOX’s Gotham the prequel series tackle
6 views0 comments

The CW keeps its DC shows as primetime headliners though Supergirl and Arrow will be moving to the time slots next fall, and the announcement of yet another potential Arrow-verse spin-off may be in the works! Though the spring season may be just be blossoming its first buds, in New York City at the annual network Upfronts event many of the Fall Shows are being announced as primetime begins to take shape, even as the current season finales are just winding down. Among the more
2 views0 comments

Oliver Queen’s job as Star City’s defender just got more complicated, especially as tensions rise among his long-time partnerships including John Diggle who appears ready to wrestle him for the title of Green Arrow! Oliver Queen’s (Stephen Amell) problems continue to mount as the latest episode of Arrow in Season 6 “Brothers in Arms” continues to see the world of Star City’s Emerald Archer collapsing in on itself. Though the threat of computer hacker Caydon James was irrevoca
4 views0 comments

Before she was an intrepid reporter covering the rise of Central City’s Scarlet Speedster The Flash’s CANDICE PATTON was always a certified fangirl and she’s proving it in this exclusive interview with Fangirling… From the moment she stepped into the shoes of Iris West on The Flash Candice Patton assumed the inevitable responsibility that went along with the very iconic character that has been a part of the DC Comics’ mythology since her Silver Age introduction. Patton made i
3 views0 comments

Next fall there will be more Arrow, more of The Flash and still more DC’s Legends dominating the primetime landscape on The CW. So might some other heroes join the line-up? And exhale! DC Comics fans have a lot to be grateful for, as The CW announced that its entire primetime line-up, inspired by the DC heroes will be returning for another new season! That means that Oliver Queen played by Stephen Amell will continue on his mission to save Star City in Season 7 of Arrow the s
4 views0 comments

The Scarlet Speedster moves toward a publishing milestone with its Issue #39 celebrating 700 issues ever! And the very dramatic return of one of greatest villains in THE FLASH mythology! Welcome to the new Modern Age of Comics! Where comics embrace and actually celebrate their publishing legacies by reverting back to or embracing their original numeric issues. With everyone eagerly counting down to the return of the “classic” Superman in the historic Action Comics #1000 most
3 views0 comments

The tweet heard round the world has fans wondering if The CW series is preparing to introduce some more changes, and more heroes, this season that might lead to a spin-off! Though it’s only just entered into its Third Season DC’s Legend of Tomorrow which premiered four weeks ago on The CW, is apparently already going through some changes — and some may have a significant affect on the series’ cast as the adventure progresses. Accused of having “broken” the timeline, the Lege
3 views0 comments
1
2