Entering into its final season, Gotham Season 5 has high expectations on keeping fans engaged long enough to wrap up the prequel series that backstories the arrival of the Dark Knight. When it was launched five seasons ago alongside the largely booming DC TV primetime universe, Gotham was potentially appeared the easiest sell to fans who were excited that Arrow was about to spin-off The Flash and a certain magic wielder was also arriving on the scene on one of the most mainst
1 view0 comments

In Case You Missed It (that’s what the acronym ICYMI standa for) Warner Bros Animation kicked off the fall with the proper release of its award-winning BATMAN The Animated Series on Blu-ray bringing the classic series into the 21st Century proper! The entire series in its HD presentation had been introduced as part of the launch of the DC Universe subscription service (check out DCUniverse.com), before the Blu-ray release. Included with the Special Edition box set was also an
5 views0 comments

iReview | BATMAN: Mystery of the Batwoman on Blu-ray

The Batman gets mixed up in a caper that reveals a new vigilante emerges from under the shadows of Gotham City’s skyscrapers with an agenda to take down the underworld operations whether the Caped Crusader likes it or not in the animated adventure BATMAN Mystery of the Batwoman. Before she gets formally inducted into the Arrowverse during the upcoming new season of The CW hit live-action series’ much anticipated annual crossover event, Batwoman has had a storied existence tha
25 views0 comments

There’s no end to the merchandising of JUSTICE LEAGUE but do releases from MAFEX really capture the action in their latest figures based on the movie’s heroes? The feature film may have polarized its fanbase, yet the endless marketing and branding of the Justice League has ensured the continuing proliferation of the characters that appeared in the movie that finally introduced the extended DC Cinematic Universe. With an endless opportunity to rake in the profits, the items th
13 views0 comments

A classic chapter from the Emmy-Winning BATMAN Animated Series adventures reveals a feature-length tale that puts one of the Caped Crusader’s most complicated villains in the spotlight! One of the best things that came out of the release of the 1989 blockbuster motion picture Batman directed by Tim Burton was the winning animated series that inspired a darkly more interesting take of the Dark Knight. Batman: The Animated Series could have played in primetime and benefitted fr
1 view0 comments

Things Are Getting DARK as DC Comics METAL Continues

As METAL continues to heat things up the DARK NIGHTS stake their claim in the DC Comics Universe! First a little backstory! The Dark Universe is descending across the DC Comics multiverse! The latest major crossover event Metal continues to reshape the course of the mainstream continuity, all part of a major push to reignite the legacy initiative inspired by the “Rebirth” rebrand. A consequence of the less-popular “The New 52” relaunch of 2011 that rebooted the major characte
0 views0 comments

The City of Angels to Honor a Bat Man :: Adam West

The Bat-Signal will fly high tonight over Los Angeles as the city comes out to honor the memory of actor and icon Adam West of BATMAN: The Television Series fame. (Los Angeles) There will hardly be a dry eye as patrons under the skies of the City of Angels in Los Angeles, CA pay tribute to actor Adam West who passed away on Friday, June 9 at the age of 88. Best known for his work on the classic Batman television series which aired from 1966-68, West paved a path for genre ent
1 view0 comments

DC Comics Rebirth Continues :: BATMAN and THE FLASH “The Button”

The DC Comics two greatest detectives are going to have their work cut out for them when the mystery behind “The Button” that materialized at the onset of the “Rebirth” takes our heroes back to where it all started! At the onset of the DC Comics “Rebirth” story arc, Wally West, the one-time Kid Flash after having ascended to the mantle of The Flash makes an appeal to the Dark Knight and appears to Batman in the Batcave. Initially the attempt appears a failure, but before Wall
2 views0 comments

Two of the most popular creatives in DC Comics, BATMAN’s Scott Snyder and Greg Capullo return for the highly anticipated event DARK NIGHTS: METAL that will separate the true super powers in the DCU from the wimps! This current industry wide publishing “reboot” has truly lived up to its name! With “Rebirth” DC Comics has returned to telling stories with their core characters that emphasize the importance of the legacy our favorite characters have trail-blazed throughout their
2 views0 comments

The first “rebirth” of an icon BATMAN BEYOND introduced a Dark Knight for a new generation and set-up a lasting legacy for one of its greatest and longest running characters. When Warner Bros. Animation introduced Batman Beyond into its syndicated television line-up it had a seriously tough act to follow. Its award-winning predecessor Batman: The Animated Series had successfully run for four consecutive seasons, even daring a complete revamp and redesign that greatly appealed
5 views0 comments

The first “rebirth” of an icon BATMAN BEYOND introduced a Dark Knight for a new generation and set-up a lasting legacy for one of its greatest and longest running characters. When Warner Bros. Animation introduced Batman Beyond into its syndicated television line-up it had a seriously tough act to follow. Its award-winning predecessor Batman: The Animated Series had successfully run for four consecutive seasons, even daring a complete revamp and redesign that greatly appealed
1 view0 comments

What happens when the world requires a new kind of hero? That's exactly the mission that Batman has in mind when he recruits the next generation for his all-new, all-different JUSTICE LEAGUE OF AMERICA! After a mission that had the Justice League collaborating with the Suicide Squad to take down Maxwell Lord after he succumbed to the effects of the mad villain Eclipso it was clear that the planet is far more vulnerable and new threats are looming around every corner. Always o
1 view0 comments 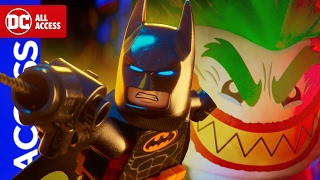 The star of the new LEGO THE BATMAN MOVIE WILL ARNETT drops by DC ALL ACCESS to talk about his latest film antics and catch up the Jason the DC ALL ACCESS host on Batman's going ons in the LEGO Land. #DCEntertainment #Batman #LEGO #DCAllAccess
1 view0 comments

The DC Comics "REBIRTH" continues to take shape as legacies are explored in the first series of VOL. 1 arc collected in graphic novel formats. If you're wondering... These are "Must Reads"! The DC Comics “Rebirth” event has dominated most of the headlines across all fan-related newswires generating great enthusiasm. After a less than stellar, truthfully lukewarm reception from their last publishing-wide reboot (back in 2011) the giants behind the comic’s industry longest runn
2 views0 comments

DC Comics continues to evolve during its latest “Rebirth”! Entering into a second act with a mystery for its greatest detectives to solve! DC’s Universe — all great and small — are in for a serious shake-up as the events of the imprint wide rebrand “Rebirth” enter now into a very critical second act. Fans have been patiently anticipating the outcome of DC Comics most recent publishing rebrand an event entitled “Rebirth”. After much of the 2011 “The New 52” reboot which renumb
1 view0 comments

They say, “Nostalgia is for geeks!” (credit Lady Gaga with that quote) but If that’s true then geeks everywhere are in for the greatest treat! This week available on Digital HD before it arrives on Blu-ray and DVD is the animated feature Batman: Return of the Caped Crusaders. Attendees at this year’s New York City Comic-Con were treated to a full-length sneak peek of the movie that reunites Adam West and Burt Ward voicing the versions of the Batman and Robin they made pop-cul
0 views0 comments

The collectible action figure market has exceedingly grown up with its market, and never more so than in the last decade. Everyone from Hasbro, Mattel to competitively invested Japanese toy makers have invested in the fabrication of sculpting multi-articulated and artfully crafted figures that outweigh their appeal to capture adult collectors, and similarly attract younger investors. The DC Comics universe and all its brand expansion has generated some high-collectible intere
0 views0 comments

The action figure collectibles market is again booming thanks to toy makers eager to latch onto the adult collector! The collectible action figure market has exceedingly grown up with its market, and never more so than in the last decade. Everyone from Hasbro, Mattel to competitively invested Japanese toy makers have invested in the fabrication of sculpting multi-articulated and artfully crafted figures that outweigh their appeal to capture adult collectors, and similarly att
0 views0 comments

Readers are still reeling from the recent “I Am Gotham” storyline which played out in the first six-issues of the DC Comics Batman relaunch which introduced a pair of super-powered vigilantes set on waging a war to defend the city they’ve named themselves after. Writer Tom King with illustrators David Finch and Ivan Reis explored the legacy of the Dark Knight, the current theme of the publishing imprint’s current reboot, from a alternate perspective as Batman himself examined
0 views0 comments
1
2